Showing posts from June, 2012
Show All

We have seen the development of a number of technologies that could be used to provide robots with a sense of touch, such as proximity and temperature sensing  hexagonal plates  and  artificial skin  constructed from semiconductor nanowires. However, perhaps none are as impressive as a tactile sensor developed by researchers at the University of California’s Viterbi School of Engineering. The group’s BioTac sensor was built to mimic a human fingertip and can outperform humans in identifying a wide range of materials, offering potential use for the technology in robotics and prostheses. The finger-sized BioTac sensor consists of a soft, flexible skin covering a liquid filling. The skin even has fingerprints that enhance the sensor’s sensitivity to vibration, so that as the sensor slides over a textured surface, it vibrates in characteristic ways. A microphone designed to be used underwater – known as a hydrophone – located within the sensor’s bone-like core detects these vibrations
Post a Comment
Read more

Cockroaches are way faster than you and me. Relative to their body weight, they can flee at the equivalent of hundreds of miles per hour and are gone long before your newspaper hits the floor. But researchers from the University of California at Berkeley recently described how cockroaches can also run toward a ledge and then flip around to its underside in the blink of an eye, effectively disappearing from predators. Now they're working on robots that can do the same. Geckos can also perform this escape act, which involves using the hind legs as anchors on the ledge while the body swings under it. "Both species ran rapidly at 12-15 body lengths-per-second toward the ledge without braking, dove off the ledge, attached their feet by claws like a grappling hook, and used a pendulum-like motion that can exceed one meter-per-second to swing around to an inverted position under the ledge, out of sight," Jean-Michel Mongeau of UC Berkeley's biophysics group and coll
Post a Comment
Read more

Hackers Have Breached Top Secret Systems of UK Ministry of Defence The UK's military's head of cyber security warned that hackers have breached computer systems containing top secret data, The Guardian reported. Major General Jonathan Shaw told the paper that the number of known breaches to top secret systems was small, but that attacks were "hard to quantify" and that "the likelihood is there are problems in there we don't know about." Shaw spoke with the UK paper about the results of an internal audit of cyber security within the Ministry of Defense that he headed. It was the first public admission by the Ministry of Defence that its own classified systems had been breached. Shaw said the admission should be a wake up call for the UK military and the UK government that it needs to boost public investment in cyber security and embrace a new generation of leaders. "This thing is moving too fast. The only people who spot what is happening
Post a Comment
Read more 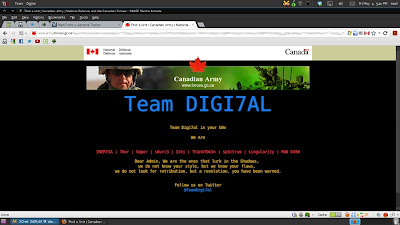 Canadian Government under Cyber Attack The “Holy Lulz Crusade of Canada” is an operation initiated by the hackers of the  Team Dig7tal  collective, but it’s uncertain if this is a form of protest against the Canadian government or simply a way of showing that websites are highly insecure. The list of targeted sites is considerably long and if in some cases they simply unveiled the presence of cross-site scripting (XSS) and SQL Injection  vulnerabilities, in other situations they’ve leaked the information found in the databases. One of the most important websites is the National Defence and Canadian Forces ( corces.gc.ca ). They not only demonstrated that the main domain contains a number of XSS security holes, but they also showed how some of the subdomains could be breached by leveraging SQL Injections. The subdomains include  navy.forces.gc.ca  and  army.forces.gc.ca .  From the systems of the Health Council of Canada they leaked database information, usernames along with t
Post a Comment
Read more
More posts