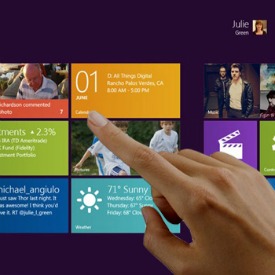 The gesture allows touch based Windows 8 systems to quickly close off running apps. Microsoft’s Windows 8 developer preview does not include such a feature and relies on the task manager to close applications. The new touch gesture was demonstrated in a video. The feature appears to work for Metro “immersive” applications only and looks to be the first of many gestures that Microsoft is planning for Windows 8. The software maker is also building in a zoom feature for the Start Screen to allow users to organize their applications into groups and move items around the screen easily.
Images of Microsoft’s improved Windows 8 Charms Bar were released on Saturday too. The images show off a translucent Charms Bar. Microsoft has enabled support for automatic updates to Internet Explorer 10. Windows 8 users can enable the feature from the about dialog box in Microsoft’s latest browser. Microsoft is currently preparing a beta copy of Windows 8, to be made available in January. Little is known about the feature set of Microsoft’s Windows 8 beta. Recently leaked screenshots indicate that Microsoft will allow users to change the Start Screen color and the Start Screen background image in beta copies of Windows 8. Microsoft has previously detailed some other minor improvements to the Windows 8 beta. Users will be able to create, name and rearrange Start Screen groups as well as navigate with the Windows 8 Apps screen in a better way. Microsoft is planning to group applications to make it easier for users to identify them in Windows 8 beta. Windows Media Center will also return to Windows 8 beta alongside the typical Windows games, DVD creator and .NET 3.5.