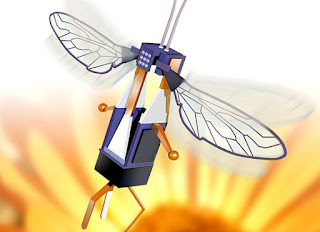 As engineers and scientists collaborate to design ever more sophisticated aerial robots, nature has been a constant source of inspiration, with flying insects, birds and mammals providing valuable insights on how to get airborne.

Recently, a robotics team at Harvard University developed a method that would allow their insect-size flying robot — dubbed "RoboBee" — to conserve energy midflight, much as bees, bats and birds do.

By attaching a shock-absorbing mount and a patch that conducts electricity, the researchers were able to direct the tiny robot to perch on a variety of surfaces and then take off again. When activated, the electrical charge held RoboBee in place, much like how a balloon will stick to a wall after you rub it against a wool sweater. Terminating the charge enabled the robot to detach from the surface and fly away.

RoboBee is about the size and weight of an actual bee — about 0.004 ounces (100 milligrams) and 0.8 inches (20 millimeters) tall, with a wingspan of 1.4 inches (36 millimeters), according to the study's lead author, Moritz Graule, who conducted his research as a student at the Harvard John A. Paulson School of Engineering and Applied Sciences (SEAS) and the Wyss Institute for Biologically Inspired Engineering (WIBIE) at Harvard University.

Thin copper wires send control signals and power to the robot body, and the wings can move independently and are driven by "artificial flight muscles," Graule told Live Science in an email.
Flight of the RoboBee.

The robot originally made its debut in 2013, in a study published May 3 in the journal Science. It was the first robotic insect that was capable of hovering, Graule said, and it was modified for the new study to allow it to land midflight.

Why would a flying drone need to perch? For much the same reason that flying animals pause during their flights — to conserve energy.

"Many applications for small drones require them to stay in the air for extended periods," Graule said. "Unfortunately, today's flying microrobots run out of energy quickly (approximately 10 to 30 minutes). We want to keep them aloft longer without draining too much energy."

While RoboBee's flying technique closely mimics the biomechanics of insect flight, finding a method that would allow the robot to perch on different surfaces required an approach that didn't follow natural models as closely, Graule said. Animals use adhesives or gripping mechanisms to hold themselves in place, but those weren't practical choices for such a tiny robot, according to the researchers.

The solution was electrostatic adhesion. The scientists attached an electrode patch to the top of RoboBee, which could be charged to create an attraction to a target surface. RoboBee would fly up toward a target, and at contact, the charge would be activated. Small pulses of energy kept the robot "stuck," and turning off the charge allowed RoboBee to easily drop off and continue on its merry way.