Hacktivist grop Anonymous continued its attacks on the Indian government and creative industries at the weekend by taking out the web sites of the national CERT and the country’s President in retaliation for widespread blocks on video and file sharing sites.
The group’s @opindia_revenge Twitter account documented the latest attacks, which also appeared to take offline the web site of film company and broadcaster Reliance Big Entertainment, and government portal india.gov.in.

All are now back online, having apparently been struck by a DDoS attack on Saturday or Sunday.
In a more unusual attack, the group also defaced the web site of an apparently innocent company – ABC Krishi Equipments – which makes agricultural machinery, in an apparent warning to the government.
“Government wouldn't want this to happen on their website ryt? They shud know we are still watching,” the group tweeted.
The attacks were first heralded over a week ago in a YouTube message from the hacktivist group which called out the Department of Telecommunications for effectively ordering Internet Service Providers to block file-sharing sites in India.
In reality it was Chennai-based anti-piracy service provider Copyright Labs which won the injunction from the Supreme Court to stop sites which were allowing the illegal sharing of the Tamil movies 3 and Dhammu.
When implemented by the ISPs, however, the John Doe order also blocked several legitimate sites including Vimeo and Daily Motion.
The #OpIndia campaign is just the latest in a long line of high profile attacks on governments and big business which the group has accused of corruption, censorship or human rights abuses.
However, Anonymous was forced to deny responsibility for a separate attack on an Indian military web site labelled part of 'Operation Kashmir'.
“We are not involved in attacking the web site of the Indian National Army,” it told Times of India. “We believe a country's defence organisations should be left alone." 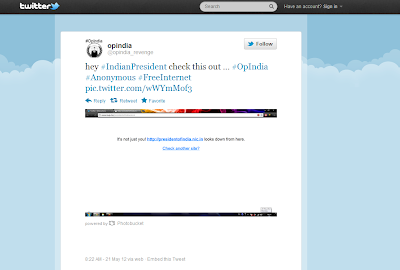