By Unknown - March 14, 2012
Mobile HTML5 developer framework Sencha wants to be more than just a tool to develop hybrid mobile applications. The company's roadmap for 2012 is to become an end-to-end solution for designing, developing and deploying HTML5 applications and is taking its first steps toward that goal today by releasing Sencha Touch 2 out of beta. Sencha Touch 2 gives developers a better user interface for developing HTML5 that will give consumers a more robust user experience.
Sencha also wants to play nice with the mobile development ecosystem. Touch 2 is the first framework that will allow developers to write Android and iOS apps from either a Windows PC or a Mac. That means that iOS developers are no longer tied to XCode on the Mac for building iOS apps. Presenting that freedom to developers should help Sencha win the hearts of many mobile publishers.
Sencha is focusing on three core areas for the public release of Touch 2: better consumer user experience, better developer support and development experience as well as working to improve the development ecosystem.
"We've updated and refreshed the API for Sencha Touch to make it even easier to build applications as well as out of the box we are shipping a set of full fledged built applications that developers can modify or use as their own references for locations. These are apps that use the Facebook API, apps that take advantage of custom themes," said Aditya Bansod, senior director of product management at Sencha.

The core uses of Sencha HTML5 platform are to prototype, design, develop, package and deploy HTML5 apps. The company wants to make using the platform as painless as possible for developers and was one of the core goals for the team in updating Touch. The framework itself has been updated with a more streamlined UI for developers that Bansod describes as more 'visceral.' Sencha worked to create better performance for hybrid HTML5 apps for iOS and Android and has updated many of its native API containers to take advantage of camera, push messaging, device orientation and scrolling.
Sencha spent the most time with Touch 2 working to improve Android performance. It is well known in the mobile ecosystem that the native Android browser lacks well behind iOS and one of Sencha's primary goals was to improve that performance.
'We have spent endless amount of time working and tuning for Android. Like list performance, for example. It might seem mundane but for user experience it is so important,' Bansod said. 'I throw a list and it actually flies as far as I want it to as well as animations feel as well as they should for the platform. So, we spent time with device manufacturers understanding their implementations of WebKit and what we ended up doing is building specific implementations of our core performance APIs for each specific platform. The developer does not see this, thankfully, the developer sees one common API and we use different parts of HTML and CSS to actually do the performance work under the hood on the developers' behalf. 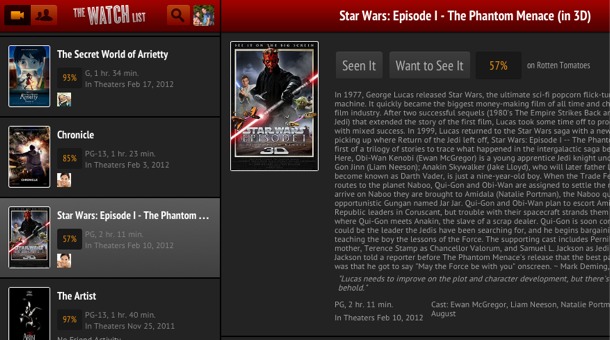 One of the key shifts for Sencha in releasing Touch 2 is a focus on the mobile ecosystem. While competitor appMobi is almost always focused on the ecosystem, Sencha has always been about the HTML5 spec and creating better tools.
'The native packaging kit that allows you to build on Mac and Windows is totally novel in the mobile ecosystem,' Bansod said. 'We have some new UI controls in the updated APIs and that will help while building your applications as well as building apps that have much more of a look and a feel that look native-like.'
Out of the box, Sencha Touch 2 comes with several applications that can be used as guides for building with the platform. The company sent ReadWriteMobile several test devices to show this off. For iOS that includes an app called 'The Watch List' (pictured above) that shares what movies you want to see or have seen with friends. 'TouchStyle' is an app for purchasing home and fashion items. On Android applications include Sencha Radio and Sencha Jog.
It is one thing to give developers a couple sample apps but Sencha takes it a step further with its Kitchen Sink application that shows off exactly what can be done within the framework and gives source code examples. This feature is beneficial to both new programmers looking for ways to create rounded buttons or experienced developers having trouble with HTML5 audio or video integration. 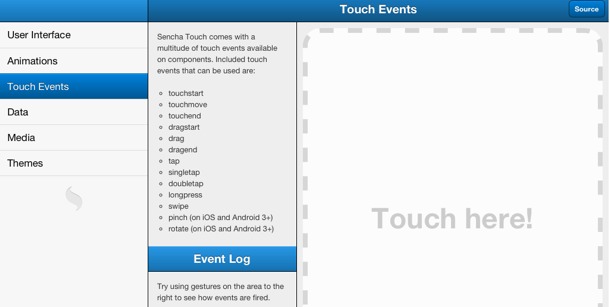 Sencha wants to differentiate itself from other framework and container providers such as appMobi, PhoneGap, Conduit and Brightcove. The ability to write code from any computer available is a good start.
"PhoneGap requires that you develop in XCode on the Mac and if you are a PC developer, that is what you are stuck with. In the other rounds, appMobi has a build service and we have heard from a lot of developers that they do not want to give a third party that they do not know their private keys because that is what it requires, you have to give your sign in keys to the third party to build it for you. We want to give developers that capability locally so they do not have to trust someone else with their keys," Bansod said.
The entire Sencha HTML5 platform will be released and updated this year. The next step is called Sencha Designer that will be used to help accelerate design aspects of building apps. Deployment will be handled through Sencha.io that will also have an update sometime in 2012. Touch 2 remains a free service as the company plans on monetizing around other aspects of the platform. Touch 2 will be issued on the GPL3 and Sencha Commercial License.
Sencha Touch 2 was released to beta in Sept. 2011 but the company is now ready to release the full version. For those that have been using the beta, much will remain the same with a few developer UI improvements.
"Sencha Touch 2 is the cornerstone behind what we are going to be doing in the next couple months around the Sencha HTML5 platform. Using Sencha Touch and the new capabilities in Touch 2 to form the cornerstone of the developer experience from designing, developing and deploying their HTML5 applications," Bansod said.
Source (ReadWrite)
ios iphone Application Development Sencha