By Unknown - March 15, 2012
After three months of testing, Facebook Messenger is coming to a Windows desktop near you.
The social network on Monday announced that Messenger for Windows, a standalone app that lets you IM friends via Windows 7, will be coming out of beta in a few weeks.
“Millions of people log into Facebook every day to keep up with friends. They also browse other websites and run computer programs, so it’s easy to miss important stuff,” reads a post on Facebook’s blog. “Maybe a cousin just posted about getting a new job, or a best friend wants to chat about dinner plans for tonight. You should be able to stay in touch anytime, no matter what you’re doing.”
Of course, you could do the same thing if you left Facebook open on your browser all day, but this is a way to keep in touch even if you close out of Facebook.
The desktop sequel to Messenger has been a long time coming. Facebook introduced the Android and iOS-based mobile Messenger app last August. Based on technology from Beluga, a Facebook acquisition, Messenger provides seamless integration with SMS.
In December, a version of Messenger for Windows 7 leaked. Hours later, Facebook released a version of the software. That, however, was a test, a Facebook rep says. The new iteration will be available to everyone. The rep added that Facebook designers are working on a Mac version. Facebook isn’t saying when that version will be out.
When Facebook released the test version in December, we found that the Windows app looked almost identical to the chat bar on Facebook.com. As with that feature, users get notifications when friends want to chat. Friend activity is also shown, however clicking on these items will take you to a web browser. The same goes for messages in your Facebook inbox. As the pics provided by Facebook below show, this version looks the same. 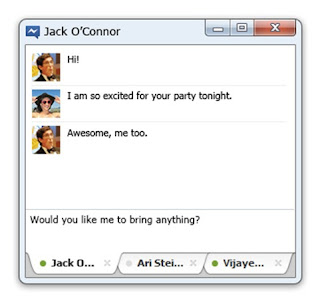 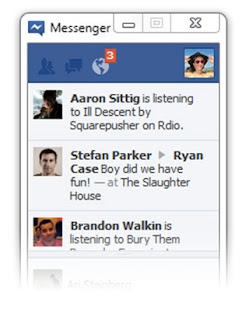